Chicken: The Wizard of Ass

This is the first of 52 "Spotlights" I'm gonna do. Little snippets of stuff we all did together as a way to introduce you to the archive I keep. I hope you enjoy it, they live on chickenjohn.com, also there is tons of stuff on my Flickr and youtube.com/ChickenJohnRinaldi with more coming all the time...

I got pissed off at Larry, and built the ugliest thing on the playa: 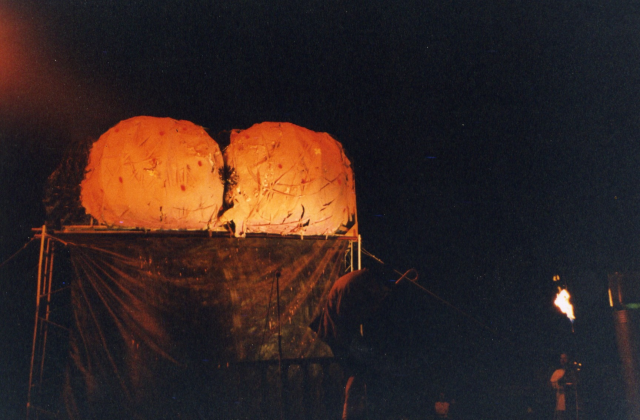 Larry wanted me to do something to help him in his battle with the Bureau of Land Management in regards to providing dumpsters for the people. But we argued, and I did that instead.

Here is the best photo Larry ever took:

This is 1998. Burning  Man hadn’t turned into a rite of passage for Canadians yet. Larry and I had very different ideas of what BM was, what it could be and why. To me, the “No Spectators” thing was a command. It was top down thinking. Them telling you what to do. The opposite of “Do Whatever You Want.”

Do Whatever You Want easily turns into Anything Can Happen. No Spectators is someone pushing you out on the dancefloor even though YOU HAVE SAID 20 TIMES YOU AREN’T IN THE MOOD FOR DANCING RIGHT NOW THANK YOU.

Enjoy this video of the show I did called: The Wizard of Ass

So as you can see, this turned into the Ask Dr. Hal Show. The premise was that the shadecloth that covered the scaffold would make it appear that the ass was floating in the night sky. People tripping balls at BM would see the ass and I would ask them to come and speak to the ass, to ask a question, perhaps. Well, what I didn’t count on was 2,000 people sitting in front of it waiting for ‘the show.’ So we lost that one aspect of it. But it worked as a ‘show’ as well.

Come on, now. Can you see it?  Giant ass floating in space, you’re all hopped up on goofballs and the ass is talking to you? That’s pretty good, no? Talking to Hal is a trip just sitting with him at a table. I smoked a joint with him once, and he read the sports page to me from a newspaper and it was the funniest thing I ever heard.

Last summer Hal and I did our 518th Ask Dr. Hal Show (23 years!) at the Wisteria Art and Music Festival. So something must be working…

1998 was the year that we woke up Tuesday morning after the burn to three inches of water on the playa.

Portable toilets overflowing. “Dome-ing,” as it were. I was still “the guy” back then, and was partially responsible for whatever went down there. I positioned my clean-up crew at the exits during the exodus, reporting to the revelers leaving that the sheriff is pulling over EVERY CAR. Best to leave your drugs with us.

Well that was kind of a disaster. Garbage bags full of drugs. Unknown  baggies of who knows what. Weed forever. Pills. Works. Tar. It was a “go to jail forever” amount of drugs. We had enough mushrooms to fix an oil spill. Between the bounty of drugs and the rain (no one in, no one out) it was a perfect storm of bohemian slacker post-event bliss. I was elated by the screaming success of the Wizard of Ass. The video is short but we did the show for hours. It was impossibly grand.

Looking back, being trapped on the playa, all mudded in with a gaggle of freaks and dropouts on the heels of weeks of the hardest work anyone has ever done surrounded by the donations of the community was the freest I have ever felt. I mean, who’s got it better than us? NOBODY!!!!

Perez built a tower in our camp that year. It was so great to have a lookout and watch the sun set from the tower.

The rain made clean up impossible. Everything was stuck. Had the rain come a day earlier, people would have died. No shit. The site would have been taken over by FEMA. Burning Man would have never happened again. It was a shitshow. Good times…

Well, Hal and I sure do clean up nice. We both have fond memories of The Wizard of Ass. Larry said he watched the show, and “liked the juxtaposition of Hal’s above the collar and my below the belt.”

I miss Larry. The world is darker with him not in it.